When discussing plastic surgery treatment options with men, I'm often told how they don't want to be made to look fake, overdone or femininized. This is an understandable concern given how some male celebrities appear to have had work done that has created this type of look.

When it comes to rejuvenating the upper eyelid area in men an important consideration, in my mind, is that less is more. Many factors can go into treating this area including trimming excess upper lid skin and raising droopy brows. Unless the brows are significantly droopy I find that it is often best to focus on excising a patient's redundant upper eyelid skin.

The concern with both elevating the eyebrows and trimming the eyelid skin (during the same surgery) is that an overly sculpted, femininized appearance could result. Similarly, I rarely remove upper eyelid fat in order to avoid an overly-sculpted appearance.

A conservative approach is often best with male patients wishing to improve their upper eyelid area. When performing the procedure I make sure to maintain a normal distance between the eyelash line and upper lid creases (being careful not to make it too high) as I don't want to create excessive upper lid show. This distance varies from person to person and also varies among different ethnicities, but typically ranges from about 6 to 10 millimeters.

This patient is a great example how this approach can work very well. 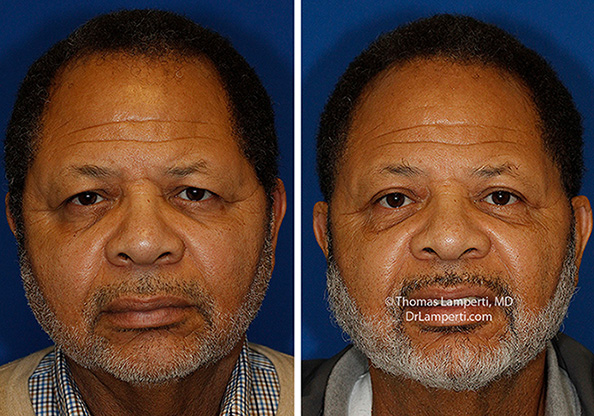 In the before photo on the left you can see how this patient has droopy upper eyelid skin (especially toward the sides) worse on his left than right eye. His eye brow position is normal. In the 4 month after blepharoplasty photo you can note how he has nicely improved upper lid skin show that still maintains his masculine appearance.

Another consideration when it comes to male plastic surgery is that it is very important to hide the scars as much as possible, as they don't typically wear makeup that can help cover up the scar.

In this patient you can see how his scar is very nicely hidden in his natural lid crease and the extension of the scar toward the sides is obscured very well in a natural eyelid crease line.

See how amazing my smile is now that I have more upper teeth 'show'. I have been getting a lot of compliments on my new 'post-op' look.