Toby Sheldon's plastic surgery endeavors have recently been in the news. Let's take a look at the facts and see what kind of results Sheldon was able to achieve. To put the whole story in perspective let's start with a photo of Sheldon from 10 years ago, when he was 23, and just before he started on his plastic surgery journey.

Let's see what happened from here.

Once Justin shot to fame his face was everywhere and I all I kept thinking when I saw his picture was, "I want to look like him,"' Sheldon says.... Sheldon had already spent $8,000 on hair transplants to supplement his thinning blond locks, but he wasn't happy with the results.  Once he had perfected his Bieber-style hair, Sheldon, who admits to a phobia of aging, decided he wasn't finished. "By using Justin’s charming baby face as my inspiration, I’ve been able to restructure my entire look to maintain a much more youthful appearance through plastic surgery." After his successful hair refurbishment, Sheldon had his face and lips plumped up with filler to look more youthful. Next, he had Botox and Aquamid injections in his forehead and temples.

Aquamid is a permanent facial filler that is not currently FDA approved nor available for purchase in the US. From my research it sounds like Sheldon was able to get his filler from overseas.

In 2012, he spent $4,850 on eye surgery to lift his upper eyelids. "But it took going to eight different surgeons before anyone would agree to operate on me as everyone thought I was crazy to be obsessing over such a tiny detail," he says. His most recent procedure, a three-part smile surgery, has literally turned his frown upside down in an effort to emulate his 19-year-old idol’s boyish smile. "But the more I started studying Justin and young people in general it’s really their smile that gives them their youthful glow. If you look closely, you’ll notice that when younger people just barely have their mouths open they naturally show their top teeth, giving them a sort of natural and effortless smile." For $30,000 Sheldon's Beverly Hills plastic surgeon lifted his upper lip, turned out his bottom lip and turned up the corners of his mouth to give him a 'perma-smile. He also had liposuction on his chin to smooth out his smile and had the fat from his chin transferred to his hands, lips and under his eyes.

Upper lip lift surgery is a valid way of reducing the upper lip length. It's certainly not as commonly done as lip filler injections, but it is a proven way to shorten a long upper lip and improve upper tooth show.

Even after a total of $100,000 worth of plastic surgery to look like his baby-faced idol, Toby says he still hasn’t achieved his dream look. "I know there is more work to be done in order to make a full transformation into Justin Bieber’s doppelganger like a nose job and jaw reduction, which my surgeon has suggested. Between our similar hairstyles, baby faced smile and overall youthful appearance I finally look like Justin Bieber and I couldn’t be happier about it," he says.

Okay, that's quite a bit of surgery isn't it? Let's see what Toby Sheldon looks like today. 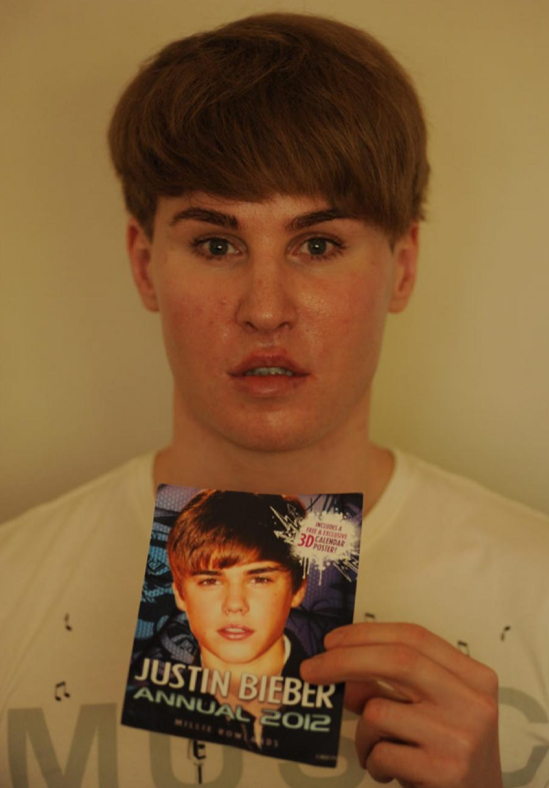 So what do you think? From my perspective Sheldon's plastic surgery is a great example of the care that must be taken when performing rejuvenative procedures in men in order to make them appear younger. For some surgeons the tendancy is to perform surgery just as they would with a woman. The problem lies in the fact that this approach very often results in an overly-feminized, fake looking man that just doesn't look quite right. Other examples of this problem include Kenny Rogers and Bruce Jenner.

So while Toby Sheldon and his surgeon used Justin Bieber as a guide, they ended up missing things a bit. Besides the issue of someone in thier 30s trying to look like a teenager, another issue in this case is the overly-arched eyebrows and feminized upper eyelid area. In looking at the photo of Toby Sheldon when he was a youthful 23 you can see that even then he didn't have such extreme upper eyelid show or raised eyebrows. I suspect the brow raising may have resulted from the botox he received to his forehead. When not done properly there is a tendancy for the lateral eyebrows to become overly raised.

Sheldon himself admits to having a fear of aging. It appears that in the quest to conquer aging he may have gone too far.

Dr. Lamperti gave me the beautiful, natural look I've always wanted....I am so happy with my results