Interested in finding out more about having a rhinoplasty (nose job) in Seattle with Dr. Lamperti?

Contact us or call 206.505.1300 to schedule a private consultation. View even more rhinoplasty before and after photos here. You can also learn more about nose reshaping surgery by reading our rhinoplasty FAQ.

Since people of different ethnicities often have noses with distinct characteristics, ethnic rhinoplasty requires a highly individualized approach. At his Seattle, Washington area practice Dr. Lamperti has extensive experience working with a diverse range of patients. Dr. Lamperti is especially attuned to the various aesthetic needs and preferences of African-American, Asian-American, Latin/Hispanic, Middle Eastern, Indian/Pakistani and other non-Caucasian patients which allows him to achieve results that harmonize beautifully with the other facial features of his patients.

Things to know about having an Ethnic Rhinoplasty

The overall considerations in Ethnic Rhinoplasty are the same as that in any Rhinoplasty. How to best allow the nose to appear seamlessly and in balance with the entire face? Dr. Lamperti may use an open (external) or closed (endonasal) technique depending on the what maneuvers need to be performed. Read more about Dr. Lamperti's rhinoplasty philosophy here. There is no one ideal nose. Dr. Lamperti is a strong believer in performing preoperative computer morphing to create a dialogue with his patients. This allows for the formation of a highly customized treatment plan based on your aesthetic preferences.

The following are some common concerns that Ethnic Rhinoplasty can address:

Having a low bridge is a common finding in Asian and African American noses. This patient had septal cartilage harvested, layered and then carved to create a customized implant. This was then placed over her nasal bridge using a hidden incision inside the nose (closed or endonasal approach). On frontal view, one can see how the patient's nose appears less wide and her eyes seem closer together. On profile view, a naturally augmented bridge can be seen. 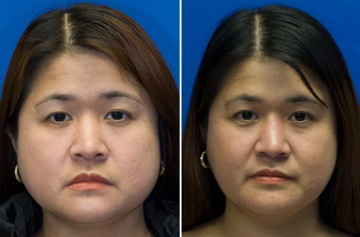 This gentleman also presented with a low nasal bridge. Dr. Lamperti used the patient's ear cartilage that he then layered and carved before placing over the dorsum using a closed rhinoplasty approach. After surgery, one can appreciate a higher starting point for the bridge and a less concave profile line. 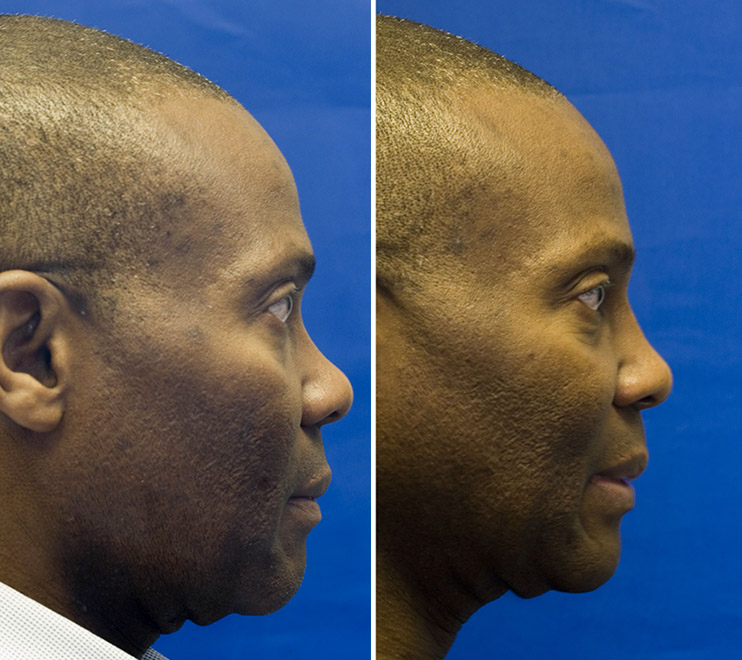 This Asian rhinoplasty patient of Japanese background also wanted to build up her bridge height. Dr. Lamperti used her septal cartilage along with an ear cartilage graft to create a customized dorsal augmentation graft. In the before and 1 year after photos you can see how her bridge looks much more narrow thanks to the increased bridge height. 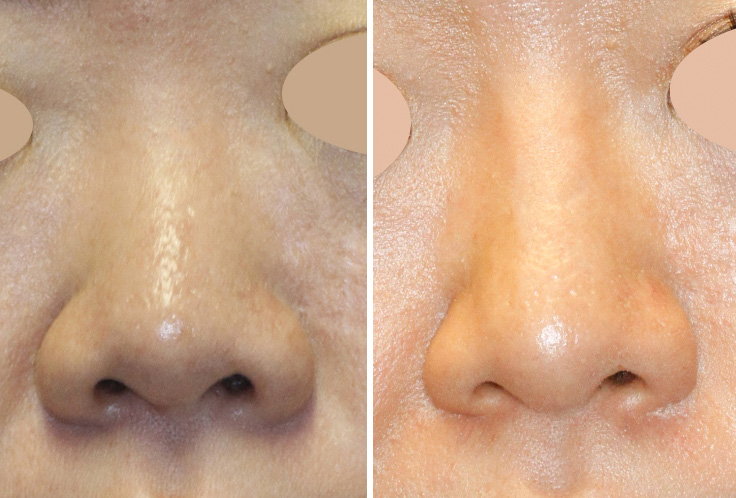 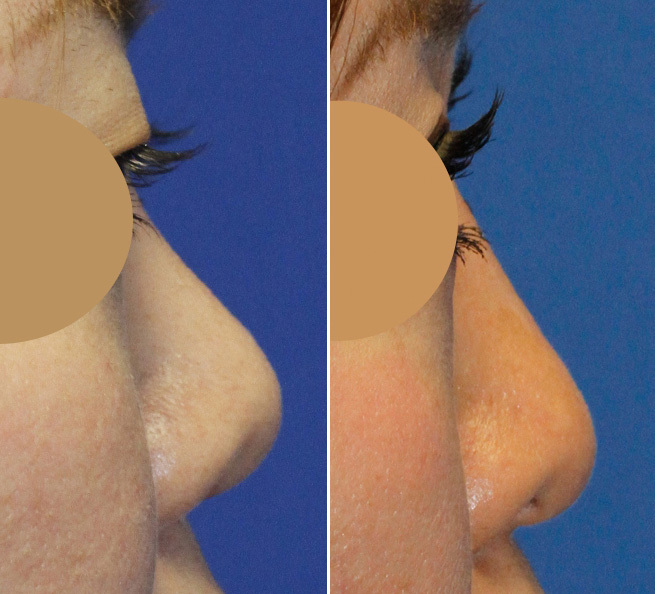 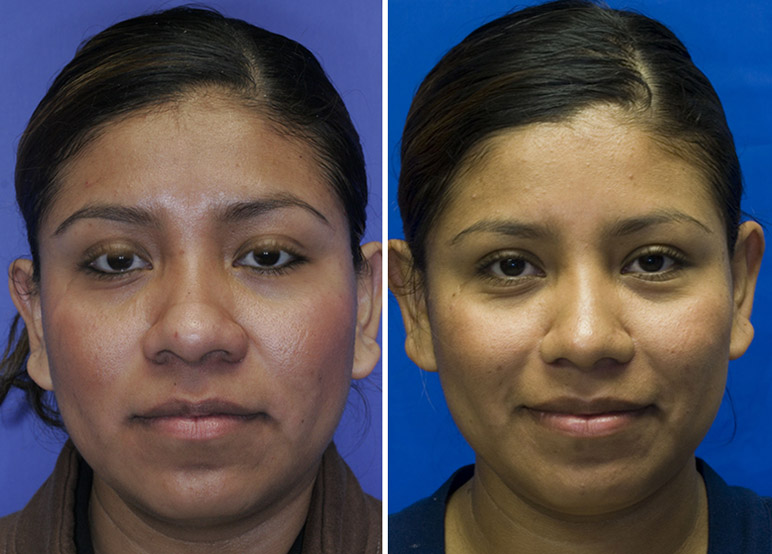 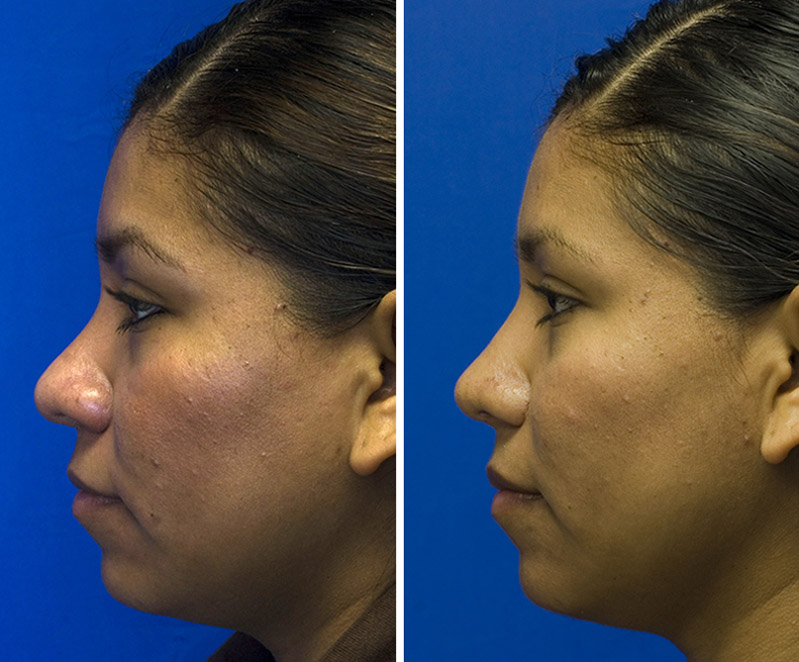 This patient also had concerns about the fullness and width of her nasal tip. Once again, by flattening the excessively convex tip cartilages a more refined tip contour is created. This patient's cartilages were also quite wide, necessitating conservative trimming of the cartilage as well. On profile, the patient wished to create a smaller, more feminine nose. A natural profile line was created while also deprojecting the nasal tip. 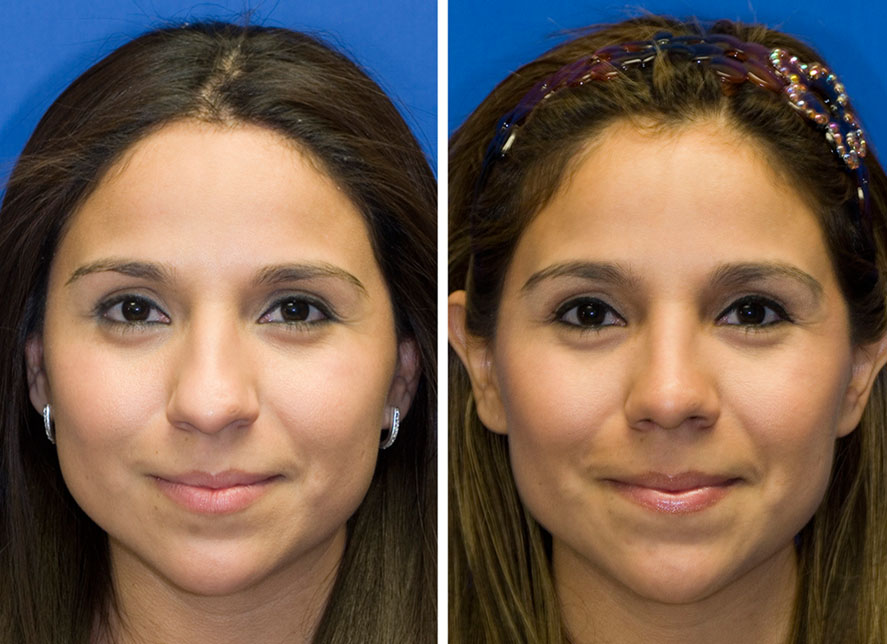 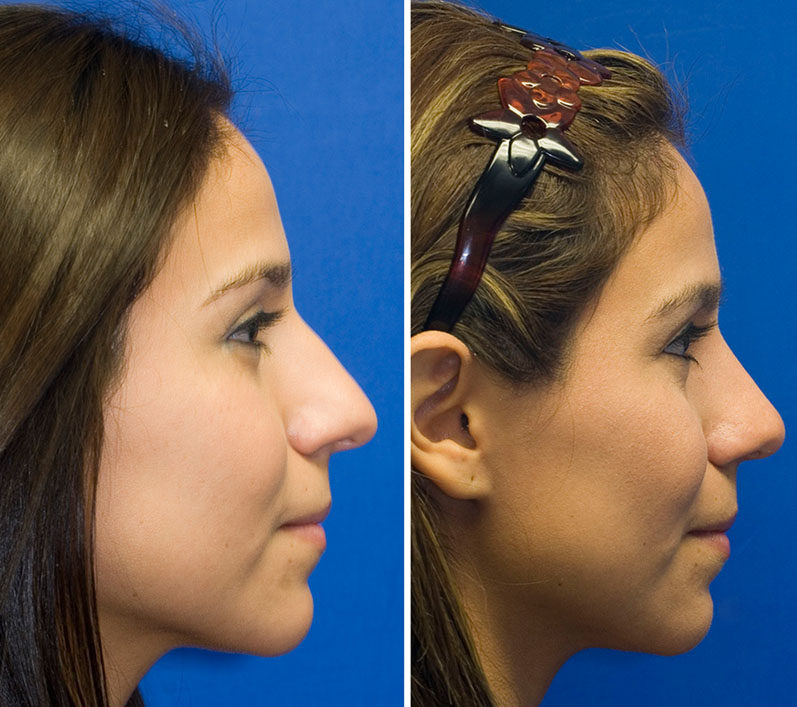 Having excessive width to the nostrils is another common issue that patients would like to have addressed during rhinoplasty. A variety of techniques are available to produce a natural reduction in the width of the base of the nose. This patient had a wedge excision of her ala in addition to a small excision of skin from the nasal sill.

This African American patient was interested in limited changes to her nose, mainly wanting to reduce the width and flare of her nostrils. An excision involving the nasal sill allowed for improvement of the patient's nostril flare while not producing an overly narrowed nose. 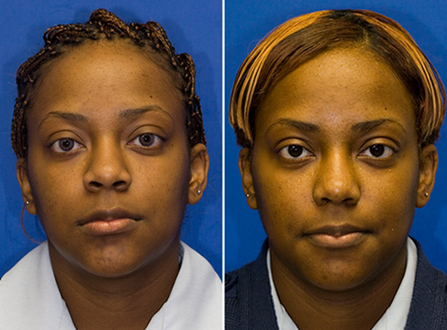 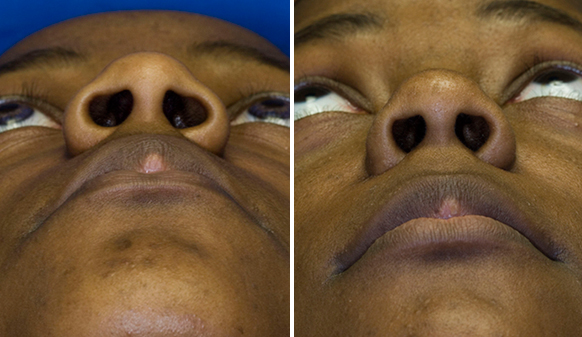 This African-Dominican rhinoplasty patient was seeking a more narrowed nostril width. An alar base reduction technique was used to conservatively narrow her flared nostrils. 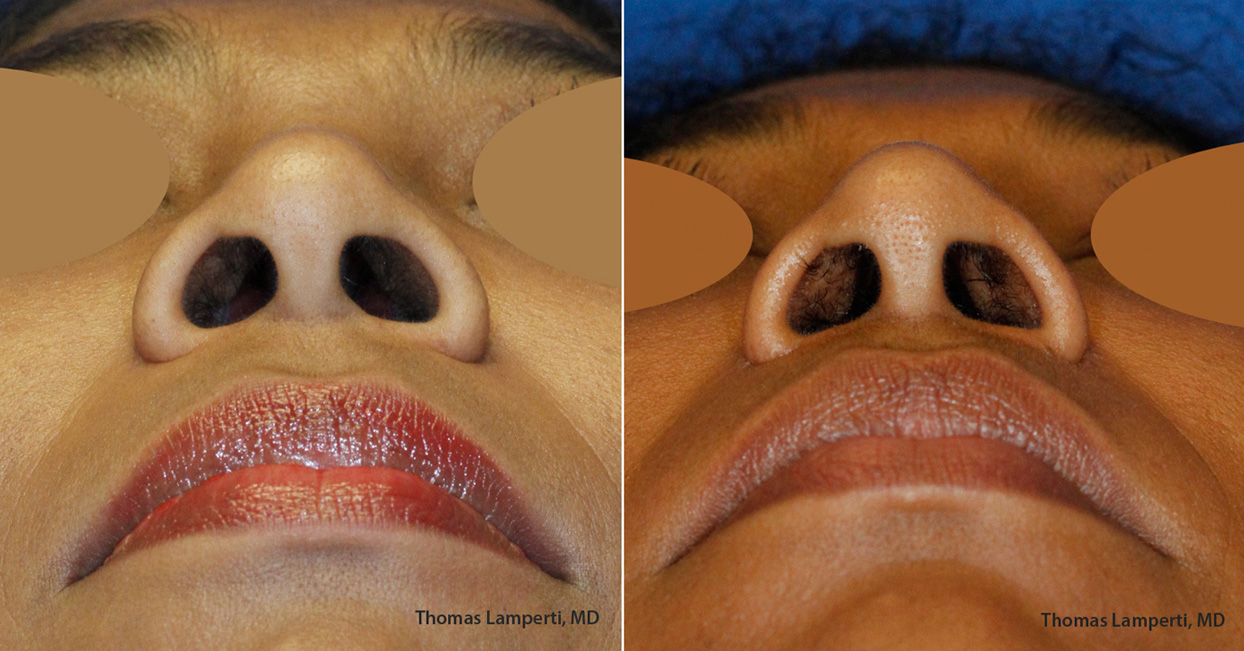 This Asian rhinoplasty patient also wanted to narrow her wide nostrils. Dr. Lamperti used a wedge excision technique during her surgery to make her nasal base less wide. 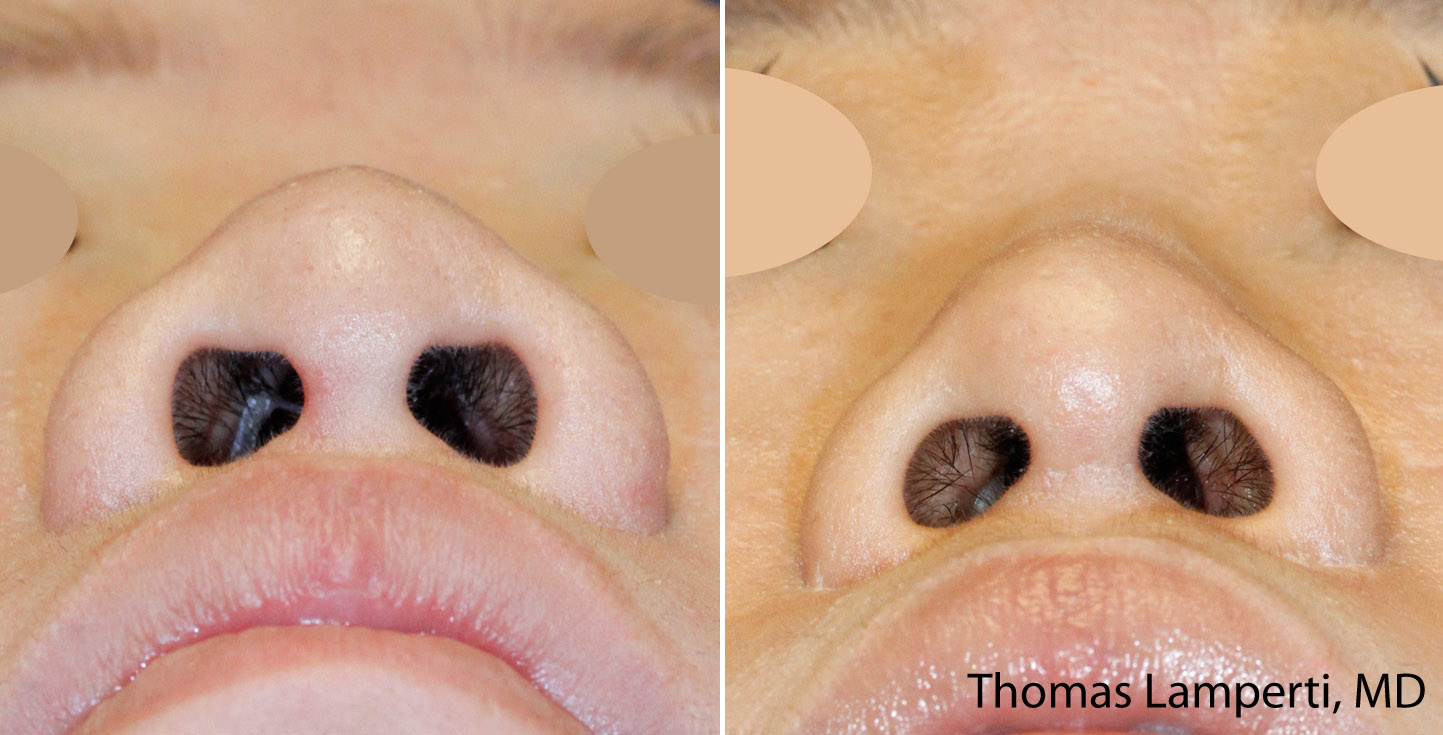 Having a nasal tip that is under-projected and under-rotated is common feature more frequently seen in Hispanic patients. The result is a prominent hump to the nose, especially in the supratip area. This patient has this characteristic in addition to tip bulbosity. By increasing the patient's tip projection and rotating the tip defining points a conservative hump removal was all that was needed to refine the patient's bridge. Importantly, a masculine profile was maintained. See additional photos of this patient and read more about his surgery here. 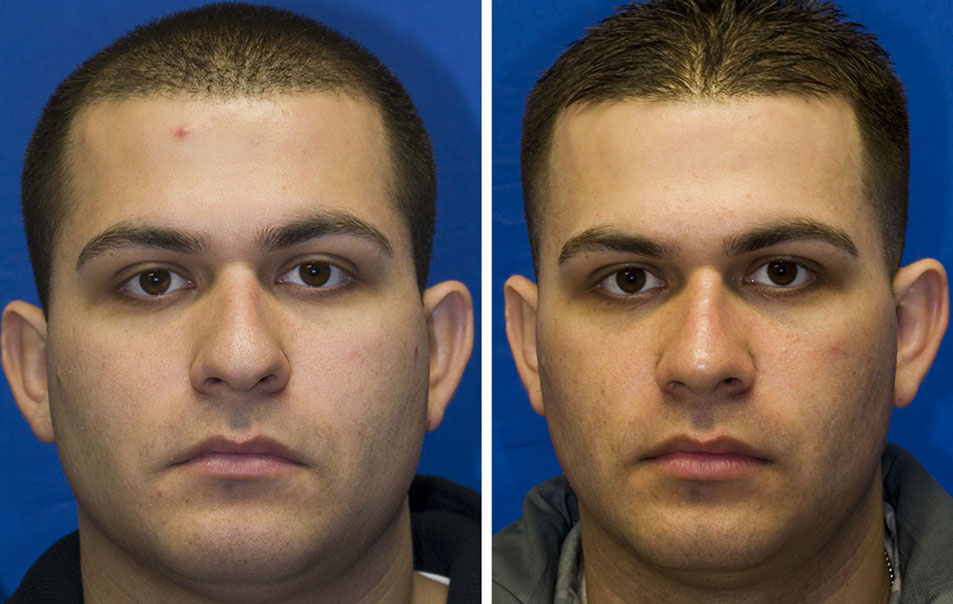 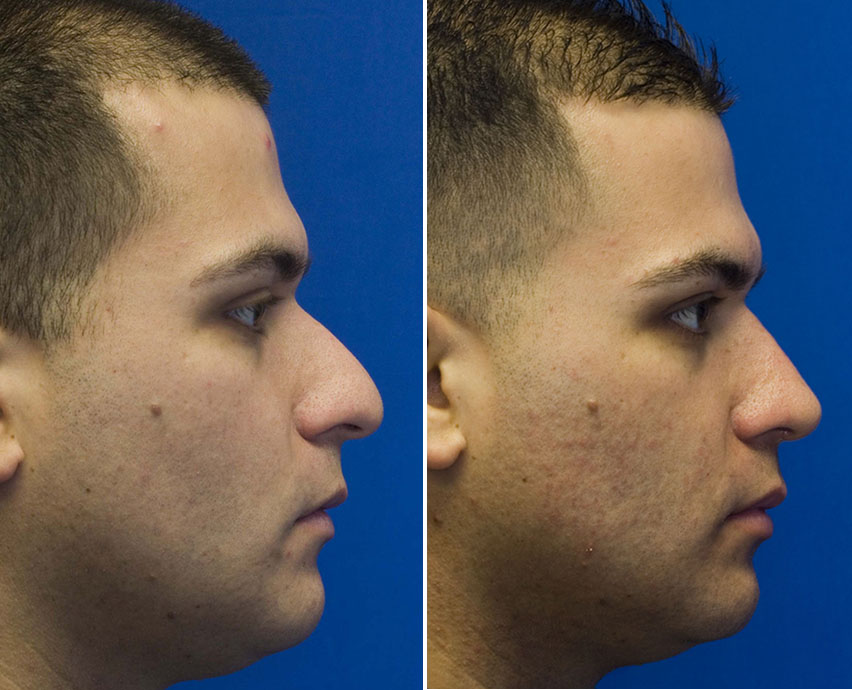 This patient is another example of the effect of having an under-projected and droopy tip. Besides addressing the tip ptosis and under-projection Dr. Lamperti also improved the tip bulbosity and refined the bridge to create a straight, but natural profile. Click here to see additional photographic views of this patient. 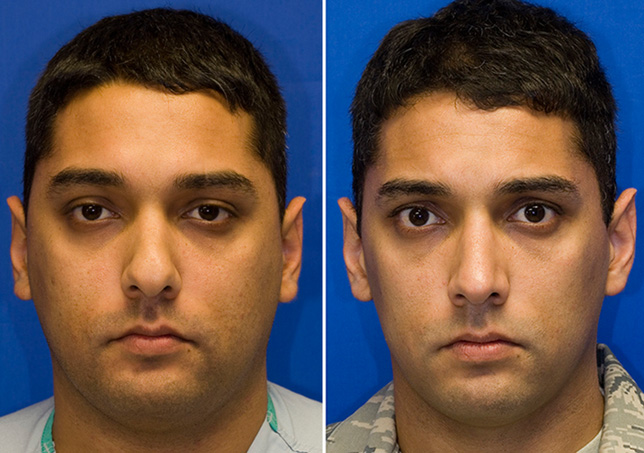 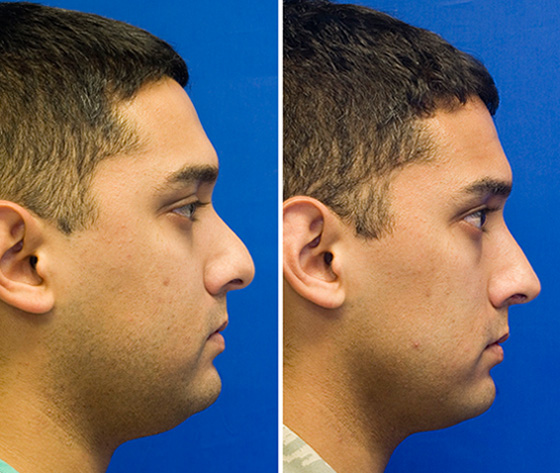 This patient wanted to improve the droopiness to his tip in addition to wanting a straighter profile. Dr. Lamperti improved the patient's under-projected and under-rotated tip and also smoothed his bridge to create a straighter bridge. 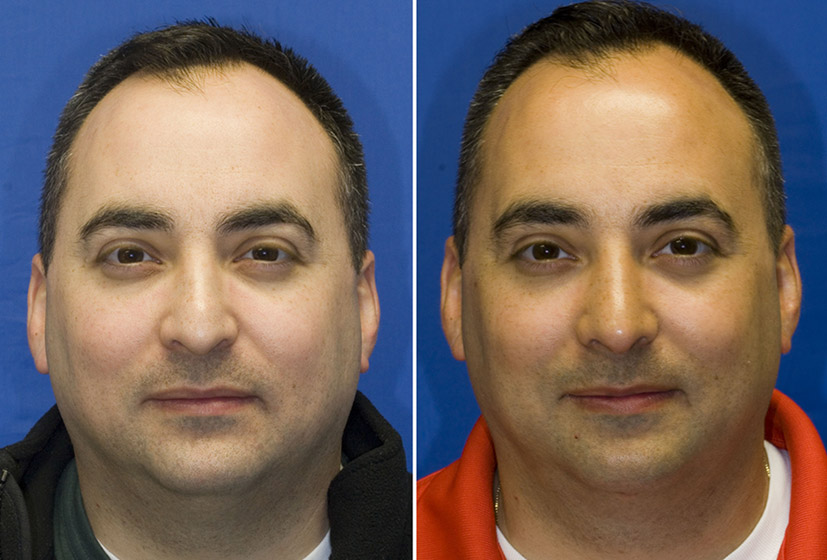 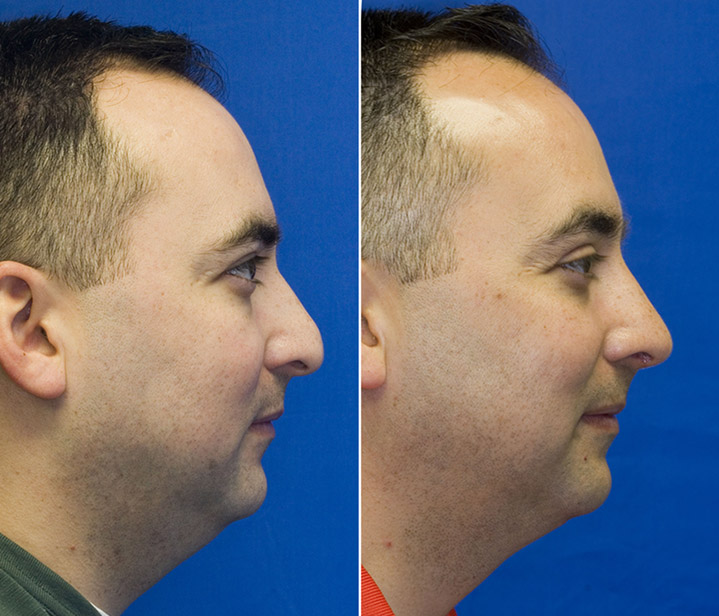 This patient is a good example of improving nasal aesthetics by enlarging the nose. This patient has very thick skin which limits the ability to make her nose smaller. By increasing the patient's tip projection the overlying skin envelope is stretched such that the nose overall appears smaller. 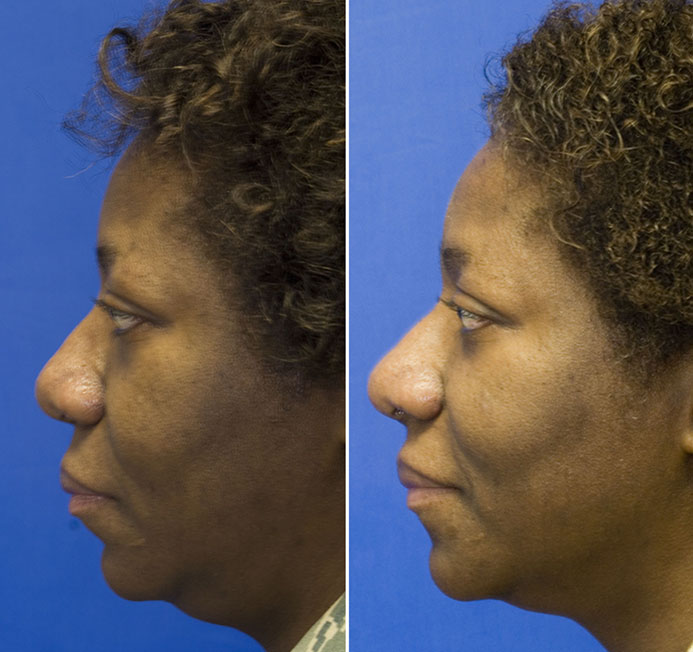 Like the noses of patients of any ethnicity one can find a nasal hump that a patient wishes to have treated. The following patient had her nasal bridge refined in addition to deprojection and slight rotation of her nasal tip. To further help balance her facial features a small chin implant was also placed. 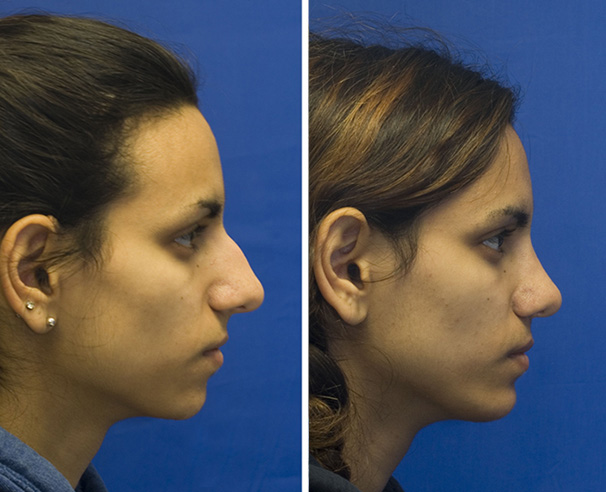 This Hispanic man wished to have the hump on his bridge improved. Dr. Lamperti removed the bump while maintaining a masculine profile. 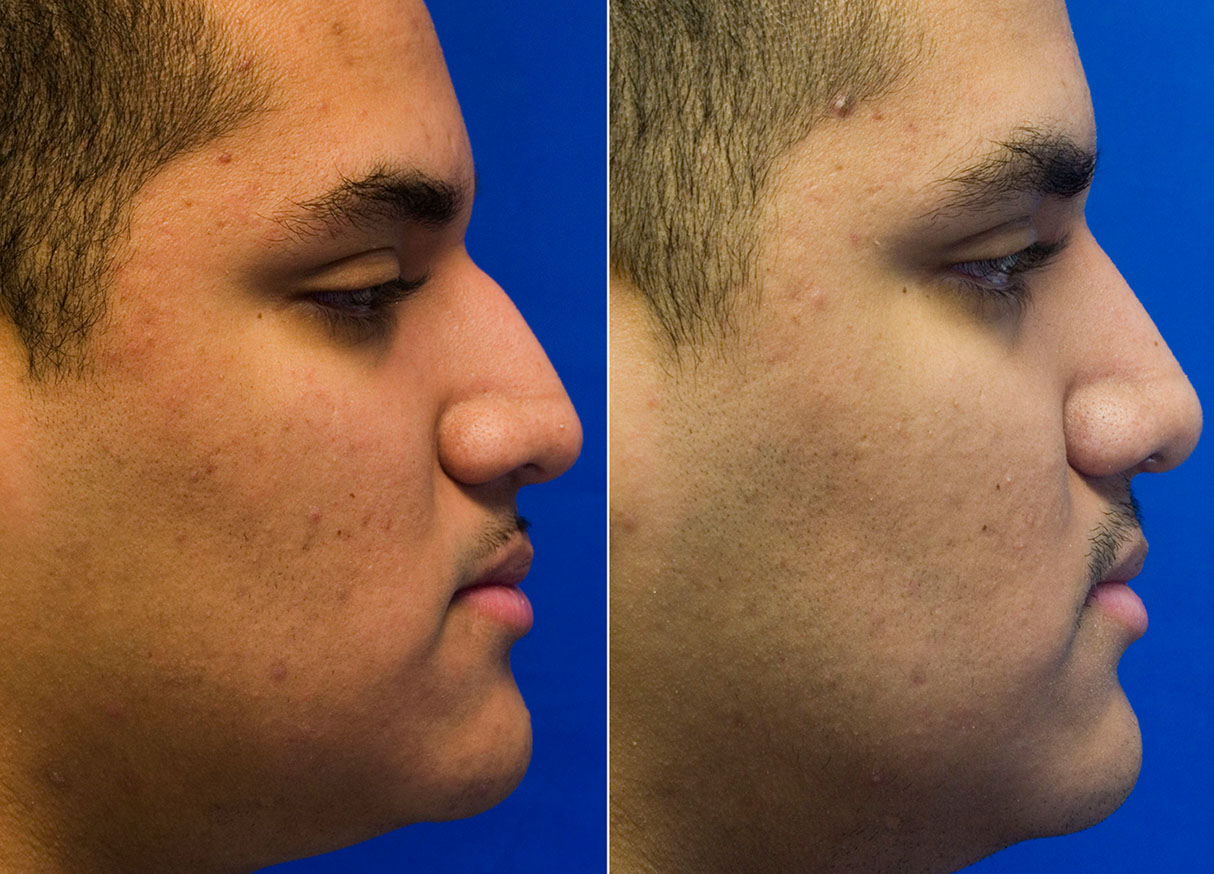 This patient was looking for a subtle change to her bridge. Dr. Lamperti conservatively took down the bump on her bridge leaving a natural profile line. 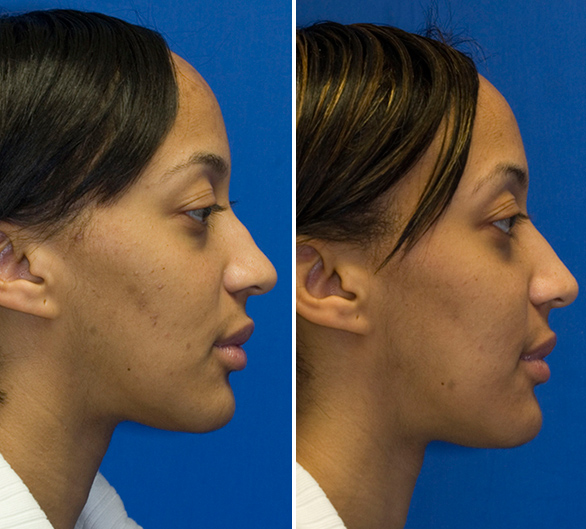 Gone are the days where the sole goal of Ethnic Rhinoplasty surgery was to merely create a more Caucasian appearing nose, erasing all vestiges of the patient's ethnic background. Dr. Lamperti understands that what patients of any ethnicity want is a nose that better blends in with and enhances the rest of their facial features.

Dr. Lamperti, a Seattle rhinoplasty super-specialist, has devoted his career to treatments of the head, face and neck. He feels that by focusing his plastic surgery endeavors solely to the face he is best able to provide the excellent results his patients desire.