If you're interested in having a tracheal shave procedure contact Dr. Lamperti's office or call (206) 505-1234 to set up a consultation.

Tracheal Shave surgery is a great method of reducing the prominence of the Adam's Apple. While most commonly performed for facial feminization for trangender patients it can also be performed in those who just want a less protruding Adam's Apple.

Some common names for the procedure include:

What Makes up the Adam's Apple?

The Adam's Apple is formed by the laryngeal prominence, a portion of the voice box cartilage (thyroid cartilage) that projects forward into the skin. 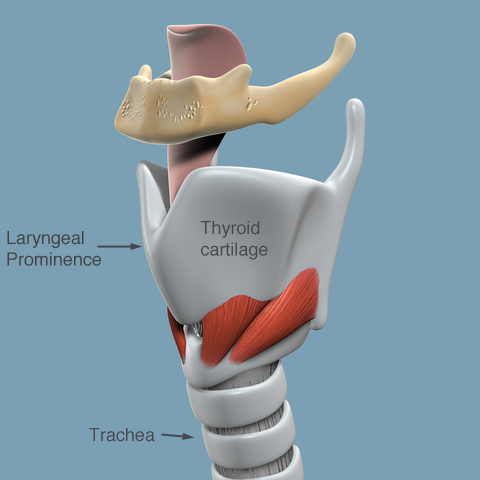 The Laryngeal Prominence size varies from person to person. Men typically have a more prominent Adam's Apple compared with women due to the effect that testosterone has on the growth of the laryngeal cartilage during puberty. There are a number of factors that affect how large the laryngeal prominence appears. Obviously, when there is a relative excess of laryngeal prominence cartilage there will be a more prominent Adam's Apple noted over the skin.

The figure below illustrates how this variation in thyroid cartilage configuration can lead to a more projecting Adam's Apple. A person's weight also plays a role as those with thin necks with little under fat can have a more noticeable laryngeal prominence than those who are heavier with thicker necks. 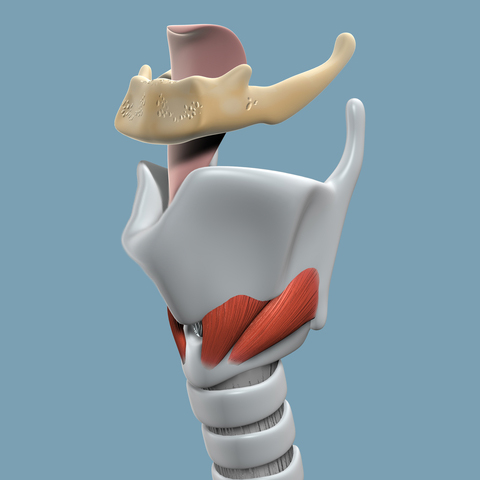 What does Tracheal Shave Surgery involve?

Thyroid cartilage reduction can be done either under local anesthesia in the office or under deeper general anesthesia in the operating room. Thomas Lamperti, MD prefers to perform tracheal shave surgery in the operating room as this allow him to also perform needle localization of the vocal cords during the procedure (learn more about needle localization below).

During surgery a horizontal incision is made in the midline of the neck. Dr. Lamperti places the incision high on the neck rather than right over the Adam's Apple. This allows the scar to be more hidden after surgery. The photo below shows Dr. Lamperti's typical incision placement for chondrolaryngoplasty. 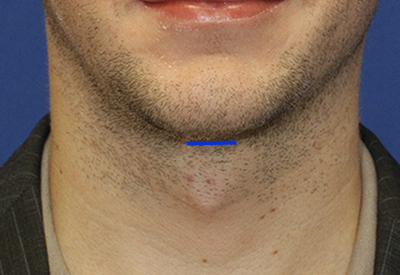 Once the incision is made, the overlying vertical muscles of the neck (strap muscles) are separated to allow exposure of the Adam's Apple (laryngeal prominence). This prominent cartilage is then shaved or trimmed to reduce how far it projects out.

It is important to realize that the thyroid cartilage gradually calcifies as we age. Advanced laryngeal prominence reduction techniques can be used to address this since this more bone-like tissue can not be shaved as easily as regular cartilage.The neck muscles are then sutured back together and the incision closed using a few layers of sutures. A compressive dressing is then placed.

How much tracheal reduction is possible?

The main limitation when it comes to reducing the prominence of the thyroid cartilage is the need to avoid injury to the vocal cords. This is related to the fact that the vocal cords insert into the laryngeal cartilage (voice box) just below the Adam's Apple. Too aggressive of a reduction may disrupt this insertion point.

One way to minimize the chance of injuring the vocal cords during Adam's apple reduction is to perform a needle localization procedure. This is done in the operating room and involves the placement of a needle through the thyroid cartilage at the planned are of cartilage shaving. The end of the needle is then localized from inside the airway using a flexible telescope (laryngoscope) to verify that it is safely above the vocal cord insertion point. In this way, the surgeon knows that the thyroid cartilage above this point is safe to shave down.

Dr. Lamperti prefers to place the incision line for tracheal shave surgery relatively high on the neck in order to allow it to be as hidden as possible.

The following intraoperative photo shows Dr. Lamperti's skin markings for the procedure. The upper line is where the incision is placed and the dots below show the extent of where the laryngeal cartilage needs to be shaved down. The middle dot marks the high point or most prominent part of the Adam's Apple.

Here is a profile photo showing the same patient's incision: 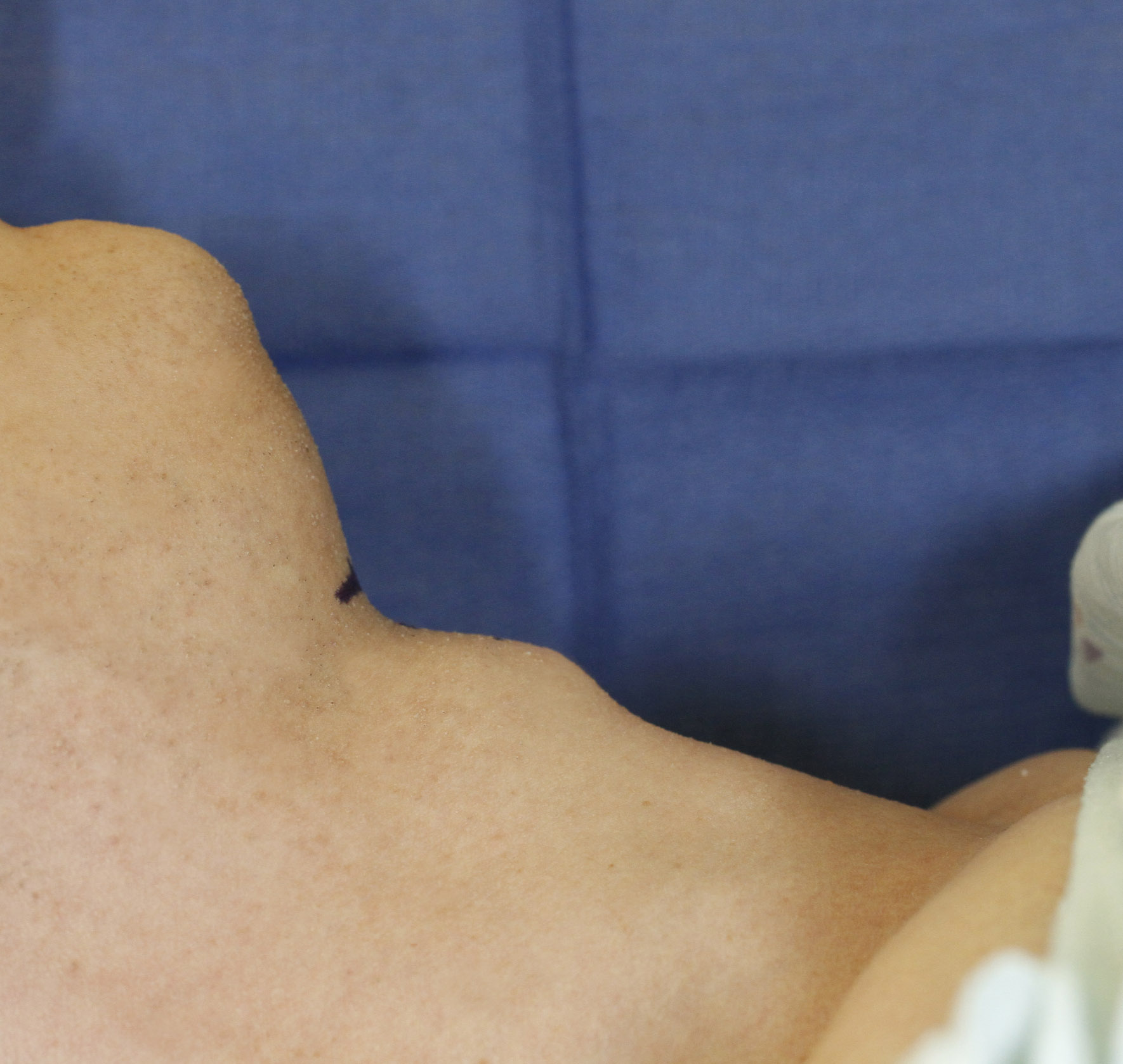 This photo shows the same patient toward the end of surgery with the completed suture line closure. The incision was closed in several layers where the under the skin sutures dissolve over the course of a few months. The outer blue suture layer seen in the photo is removed in the office about 1 week after surgery. In the photo, you can also see how Dr. Lamperti purposefully creates a somewhat raised area along the suture line. This is so that as the area heals the normal scar contracture process will then create a smooth incision line rather than a sunken or depressed one. 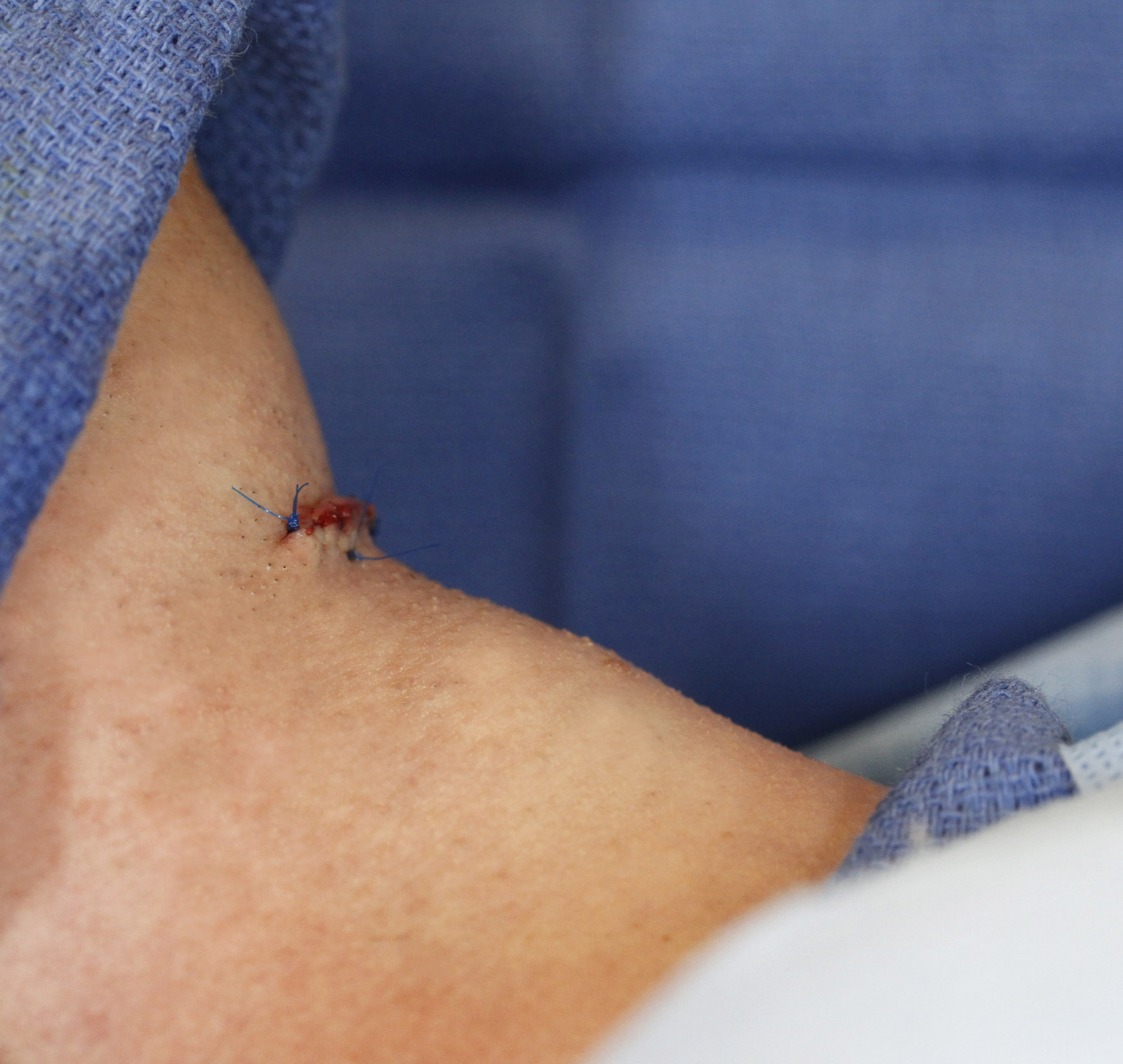 Once the tracheal shave incision is closed a soft gauze dressing is placed along with the tape. The photo below shows the appearance of this dressing after it was placed. 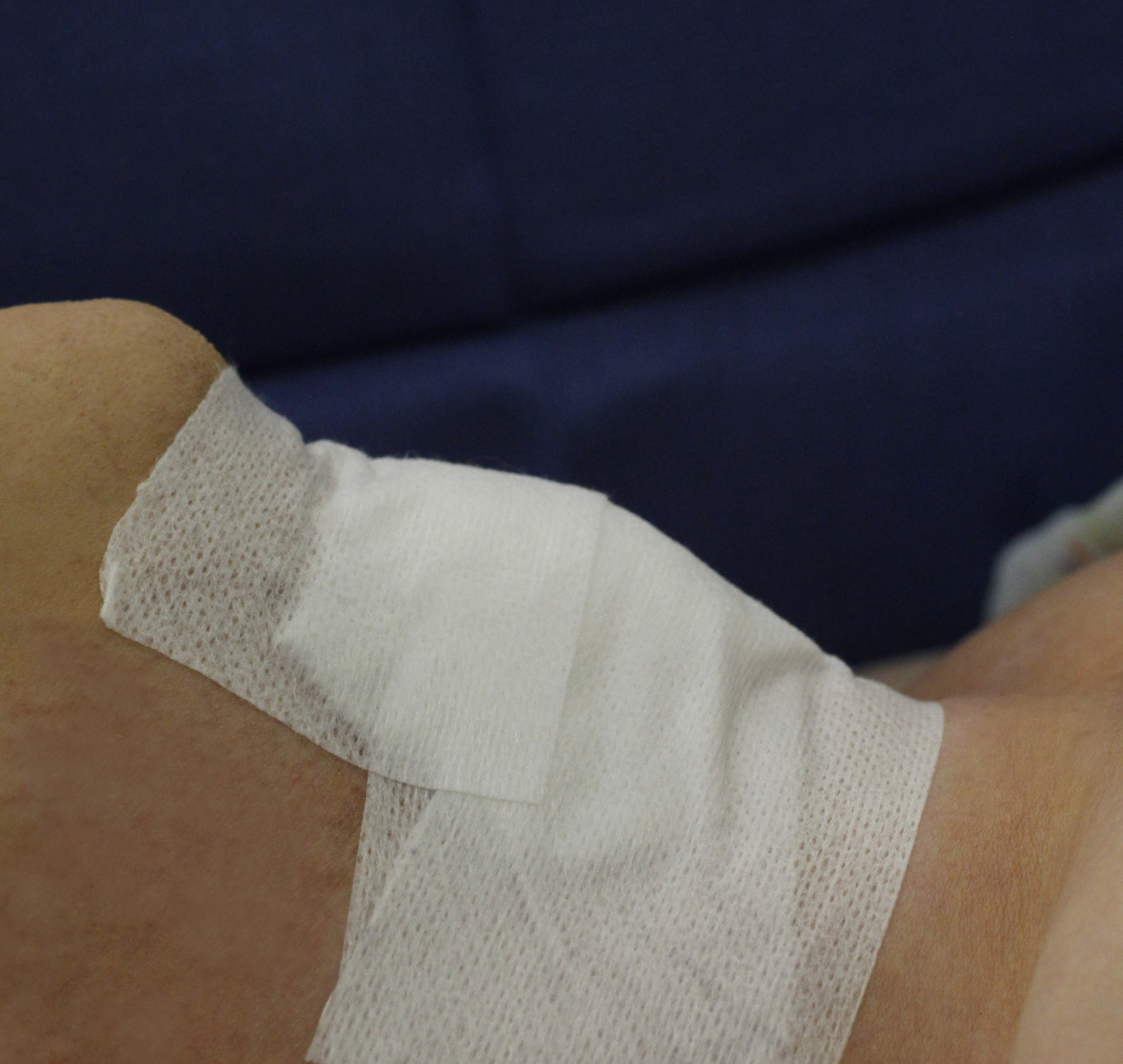 Tracheal Shave Before and After Photos

Let's look at another example of what tracheal shave surgery can achieve. This patient had been self-conscious for many years about the size of his large laryngeal prominence. He came to Dr. Lamperti to see if a tracheal shave procedure could soften the appearance of his Adam's Apple. 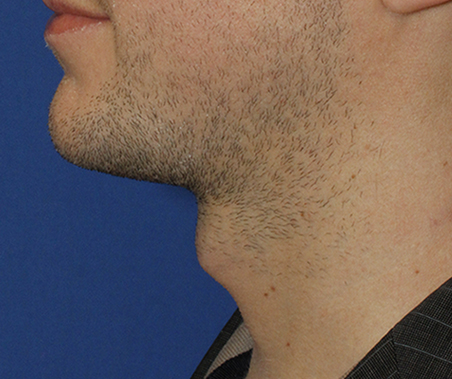 Here is a photo of the same patient from the frontal view that also shows the large size of his Adam's Apple: 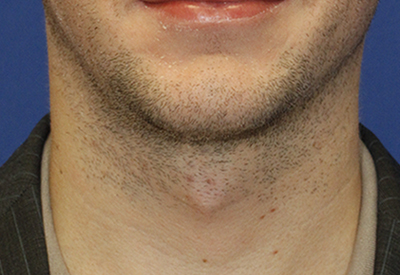 The patient had a tracheal shave procedure done by Dr. Lamperti. You can see in this photo how a dramatic improvement in the contour was able to be achieved with surgery. 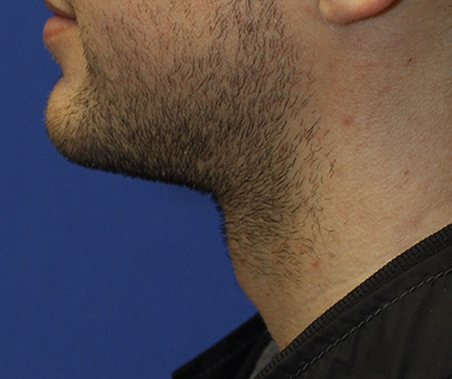 This frontal post-operative photo allows you to see how Dr. Lamperti hides the incision and scar high up on the neck in a natural skin crease. 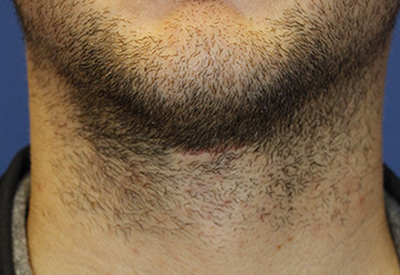 You can see even more Before and After Tracheal Shave photos (including patients undergoing facial feminization surgery) at Dr. Lamperti's photo gallery.

Dr. Lamperti, a Seattle rhinoplasty super-specialist, has devoted his career to treatments of the head, face and neck. He feels that by focusing his plastic surgery endeavors solely to the face he is best able to provide the excellent results his patients desire.